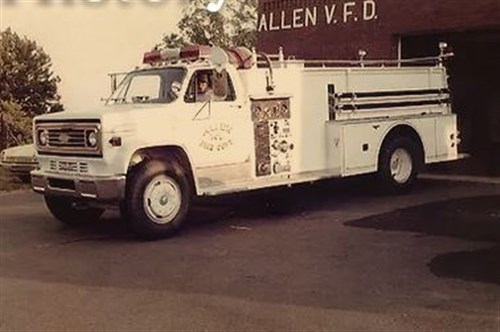 The Allen Volunteer Fire Department has been a staple of the community since 1959. Our department has its beginnings following a fire at the A.T. Allen Elementary School in 1957. The Concord Fire Department and Jackson Park Volunteer Fire Department responded, and afterwards, many of the leading residents of the area felt that it was time for a fire department of our own. The original station was a very basic building: three bays, a radio room/office, kitchen, and basement with restrooms. The community continued to come together to support the department with fund raising activities such as BBQs, chicken noodle dinners, and square dances.

A 1960 Ford chassis was bought and was sent to Adkins truck bodies in Charlotte, NC. There the chassis was fitted out with a 500 gallon per minute front mount pump, a traditional fire truck body, and hoses. This truck would serve our department and community for many years. It was sold in 1987 to make way for a new 1988 Ford pumper.

The department had its first custom built fire engine under design and was delivered in late 1971. This pumper served our department and county very well. This truck pumped at several of the major fires that occurred in that time period. It served with distinction at the Kerr Bleachery fire of 1979, the Bangle Brothers Hosiery conflagration in 1982, and the Summerlake Apartment fire in 1986. This workhorse continued to serve until it was retired in 1998.

In 1990, the Cabarrus School System offered our department the old water tower from the AT Allen school building, the only catch was that we were responsible for the demolition and removal of the tower and tank. Over the course of several nights and weekends, we disassembled the assembly and had it moved to our station. In 1992, we completed the base and completed erecting our training tower. We became the only department in the county with a true 40 foot rappelling and rescue training tower. For over 25 years, we have annually decorated this tower as a Christmas tree and this has become a beloved community tradition.

In the fall of 1987, we began our first Medical Responder program. Those members who volunteered for the additional training and calls underwent an initial training of 40 hours to begin answering medical calls. That first year we answered about 15 or 20 medical calls. Now, medical calls comprise 90% of our total call volume. As the population has grown, so has our call volume. In the mid-1980’s annual call volume was 30-40 calls a year. In 2018, we set a new record by answering over 1000 calls. To be able to cover all of these calls, we began staffing our station in the mid-2000’s with paid part-time personnel. Currently we have three personnel seven days a week. Times have changed and the stress continues to increase on the volunteer base at night.  Throughout our history we have tried to maintain the best equipment possible. Whether this was our apparatus, our personal gear or our medical equipment. We continue to strive to maintain the highest standards possible.